I’ve been tagged. Picture Tagged.  Julie asked me to find my 6th picture from my 6th album and wouldn’t you know it, its the perfect fit for this week. 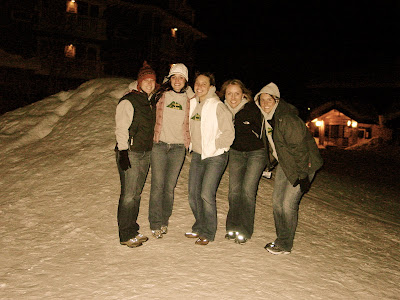 GLOW.
Giving Love Over the World
or as we call is internally
Glorious Ladies of Wrestling
The 7 of us were college roommates living in a theme house at SPU. Thats right, 7 girls in one house with two bedrooms and two usable bathrooms. We slept 4 to a room and converted the other two possible bedrooms into two study rooms. We like a lot of togetherness!  The 8th member of Glow joined us a little later but is as much a part of the crew and any of us.
We have been doing GLOW CAMP since the year after graduation. First we hit Tahoe where we all stayed in one giant room at Beth’s cabin. Yes, that means there were 7 girls, two husbands and one fiance all sleeping side by side in sleeping bags in one giant room.  Tahoe Rules! Like I said, we like a lot of togetherness.
Next came the Lake House with  Matty G, the White Tiger and several competitive volleyball games pitting the “marrieds’ vs the ‘unmarrieds’. The next year we found our Camp Home up at Schweitzer Mountain where my parents are kind enough to give us the run of their place for a long weekend each year. This coming weekend will mark our 8th year of Glow Camp!
Glow camp began with seven girls, two husbands and no children. Eight years later we have 8 ladies, 5 husbands, one serious boyfriend and 5 1/2 Glow Babies one graduate degree, and one who knows Brett Farve. Along with more inside jokes than one would think is humanly possible.
In these girls I truly have found my friends of a lifetime!
Glow Camp Rules.
In the spirit of camp I tag Swirlygirl, Latiqua, Studlow, and Lamb.