Day 1 began with a 4:00 am alarm and a 4:45 ride to the airport. We were both so excited we were nearly chipper talking to each other through blurry eyes in the car ride to catch our flight. It was a nice and easy flight…save for that one issue. We sat in the very back row of the plane, which means we were inundated by the smell of what Daren named “Poop Popsicles” the entire flight. Sometimes it got so bad and smelly that I couldn’t help but laugh hysterically. 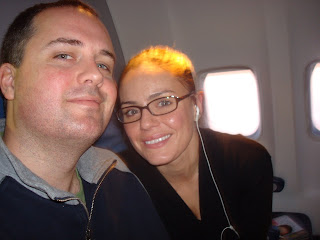 We landed at JFK and hailed our first New York cab and were off. Arriving at our “luxury” hotel about 45 minutes later. We stayed at the oh so lovely Courtyard Marriott on 3rd and 57th where there was no room service, the bar had been shut down, it took 3 servers to bring out two eggs at breakfast in the restaurant and, to really make it feel fancy, the laundry room was located dircetly across the hall from our room on the 31st floor. Meaning that if we didn’t wake up at a decent hour all on our own, the laundry room sounds would be sure to take care of that for us. It became the running joke that we will stay here everytime we come to NYC since its to nice! 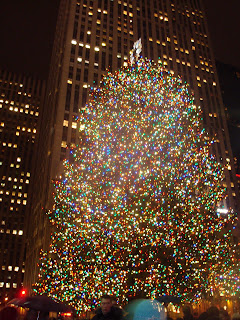 Our first order of business was the eat. As soon as we got our bags set in our room Daren said “Now, let’s get you some food. Because generally speaking, if I’m the happy one we are on trouble.” So we walked to the nearest Irish pub and sat down. O’Neil’s became our weekend home away from home. Out of our four days there, we stopped by O’Neil’s on three of them. 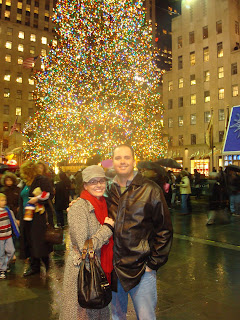 After some food and a few martini’s we set off to walk the town, see The Tree and the ice skating rink and get ourselves to our dinner reservation. On the way we ran into the Intercontinental Hotel. This was very exciting for us since we now have a thing for this chain of hotels since our entire honeymoon was spent at Intercontinentals. For this picture we flagged down an average newyorker and asked her to take our picture in the middle of the street. She obliged, but was not thrilled about it. 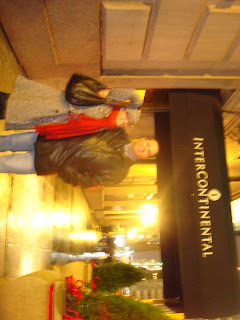 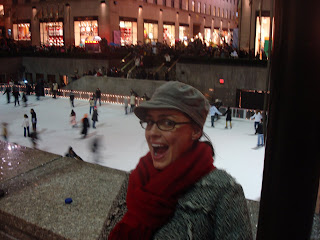 Dinner was at an out of the way French place that we found on a recommendation. When you sit down the first thing they do is bring you a Sausage Tree! Its awesome! It is literally a tree of something like six different types of sausage and you get to hack away at it and eat as much as you like. These two meat eaters loved the thing! We ordered two steaks, because clearly we needed more red meat in our diet. The food was decent but the conversation was memorable.

In NY you sit inches from the next table. We found ourselves sitting next to a couple of long time friends. She was a Catholic. He was a Jewish Atheist.

Conversation began talking about the shows to see and sights to check out. Soon, after a bottle of wine for each table, talk turned to religion. At one point it became so heated that the Jewish Atheist flew up from his table and bolted to the door in an angry rush to leave. Alas, he hadn’t paid his bill yet so he had to come back and sit for a few more minutes. His deepest argument was this, ” Brain washing”. Yes, he argued that anyone who believes in God or a God is brainwashed by their fathers. But he, being of Jewish blood line and an atheist is one of the few non-brainwashed people walking the earth today. Daren and I both had fun with that one! 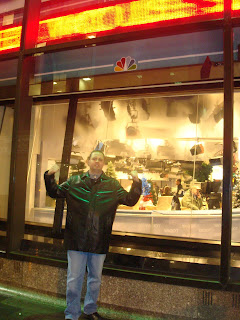 After dinner and all hyped up the city, the wine, and the locals we went in search of another local hang out…any local hang out where good drinks were served. And man alive did we ever find them! We laughed and drank our way through the neighborhood until we found ourselves back at O’Neils pub to end the night.

Our first day in New York was wonderfully fun and we laughed our heads off and celebrated just being us and being together in NYC.