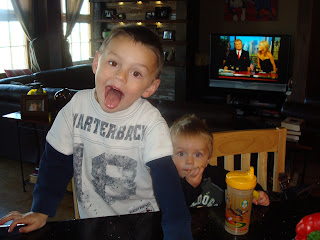 One of my favorite things about not working this summer is that its given me the opportunity to babysit my nephews Connor and Caden on occasion while my sister-in-law, Julie, goes to her ultrasound appointments for the family’s newest eddition.

It is so fun to have these two little boys running around our tiny place and chasing our two dogs. Our routine is to pick them up at the front door of the building and Connor pushes all of the buttons for the elevator and then we walk around out entire floor as he reads the numbers of each loft until he finds ours. Then after about three minutes he turns to me and says “Let’s put on a kids show” So we watch an entertaining Blues Clues or two until Connor picks a dog to walk and says “I’m ready to go on a walk!”
Today we tromped all over the neighborhood checking out the various tractors helping with the construction projects, stopped by the bank and threw rocks in the fountain. Once the three of us were cold enough we headed back to my building for lunch. It was a red letter day today that I actually had not just one but two lunch options in my house! The first time I watched the boys right after we got married Julie had to bring food from her house so that the boys had something, anything to eat! 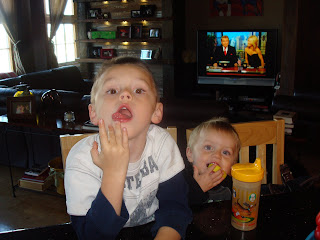 If you’re noticing that I haven’t mentioned Caden yet in this story its because he was an absolute doll. He was happy. He entertained himself. He ate all morning long and wasn’t once interested in his brothers favorite car.
Literally within 5 minutes of his mom showing up this happened. 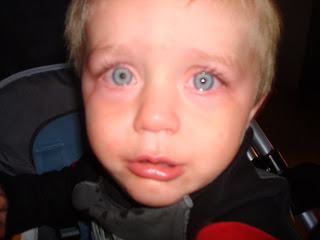 She walked in the door and he was ecstatic for all of three minutes and then burst into tears, no longer like the food in front of him and couldn’t think of anything he wanted more than Connors matchbox car. He scream cried for about 12 minutes until it was time to say goodbye to the dogs and head home. It was hysterical for me to see as the Aunt but nothing but frustrating for the mother I’m sure!
Regardless, I love getting spend time with these cute boys.
My parents have a loft down in our neighorbood too as a weekend getaway. Today Connor looked out of our bedroom window then turned around to me and said “Were is your regular house?!” As if everyone who lives in the Pearl has two homes he could play in. It was hysterical!
And, I’m getting better at this. This time no one end ended up soaking wet!