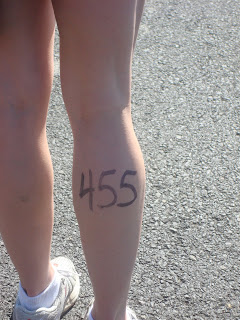 #455 made it through alive!
Yesterday I did it. I raced in and completed my first Triathlon and it was hard, scary and awesome. The race was qualified as a Sprint Triathlon and consisted of a .75 K swim in Devils Lake, a 10 mile very hilly bike ride, and a 3.1 mile run to the finish line.
The day started early with a check of my bike tire pressure and a bowl of microwaveable oatmeal and a yogurt in our hotel room. Then a brief stop at the local coffee shop for some caffeine and a sincere wish of luck from the shop owner then we headed to Regatta Park where it would all happen. 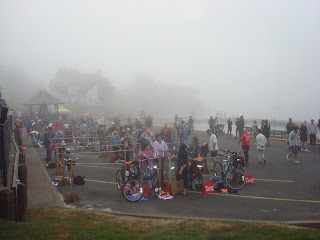 The morning was cold and foggy. We arrived and while I was checking in and getting my number drawn on each arm and right leg Daren took my bike to the bike rack. He got me a prime spot on the end meaning I have more space for all of my stuff and it is easier to get to during transitions. 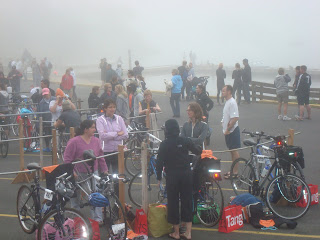 I was nervous. Very nervous. 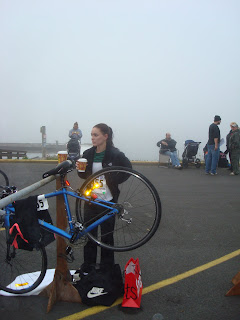 The time finally came for the wetsuits and swim caps to be donned and the pack headed toward the cold water in Devils Lake. It was still incredibly foggy and that turned out to be a big blessing. Five minutes before the start of the swimming the man in charge announced that since it is to foggy the swim would have to be cut short. Fire and Rescue could not take the buoy all the way out and the organizers were not willing to risk swimmers getting lost out in the fog. The whole pack cheered! 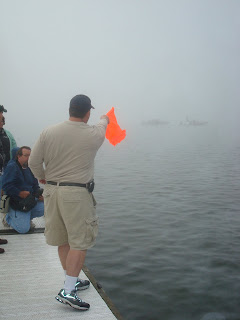 Daren’s friend Chad was also participating in this race and it was very nice to be able to stand in the water and high five someone I knew to help calm my nerves. The countdown began with 10…9…8…7…6…5…4…3…2…1 and we were off. The swimming starts with a mass start and you kick and get kicked almost the entire swim. 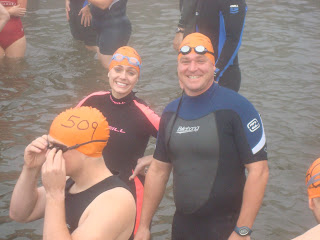 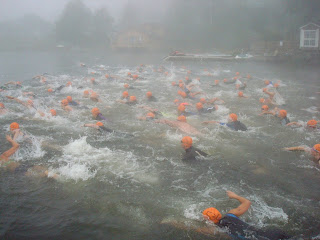 I had been swimming for maybe three minutes when it happened. An asthma attack. I was having an asthma attack while swimming in the middle of a lake, while racing, while wearing a wetsuit. I couldn’t put my head under water to swim because I couldn’t take a breath big enough to hold for any length of time. I passed the fist buoy and flipped myself onto my back kicking with my legs and grabbing at the neck of my wetsuit trying desperately to get air into my lungs. I scanned the area and found the nearest safety patrol jet ski just in case and then kept going. So much time, energy, nerves, and training days had gone into this day I didn’t want to have to quit. Slowly by surely ,with some very calculated breathing, I made my way around the second buoy and as I neared the dock I could hear Darens voice cheering me on. It gave me an extra spurt of energy and confidence to make it to my bike and my inhaler. 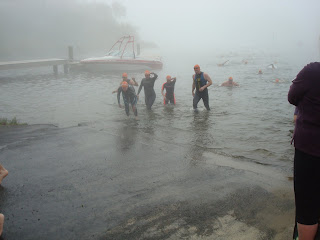 Wetsuit off. Shoes on. Helmet. Bike and Go. My brother and sister in law arrived just in time to send me off on the bike leg with cheers and encouragements. I passed one other biker on the initial accent out of the park to the inspiring cheers of my 4 year old nephew shouting “She past that one! Whoo Hoo!” 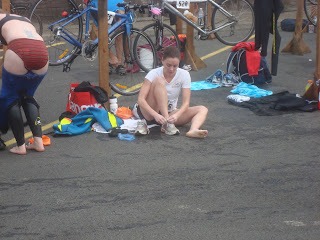 The bike ride was hard. It was full of long hills and had you shifting constantly. My gears were being funny and so on the flat and downhill parts I wasn’t able to get the traction I needed for much of the time. Nevertheless, I seemed to find my niche in the uphills and had some fun getting competitive with the other riders and sharing quips about the never ending uphill sections with other first time triathlon racers out on the course. The entire time the only song running through my head was the simply song sung by Dora in Finding Nemo “Just keep going. Just keep going…” And then all of the sudden I crested the biggest hill of all and I was done. 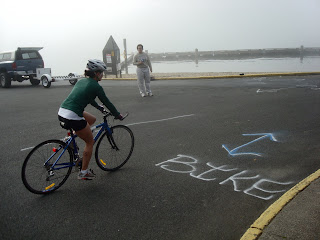 Down the hill, past my cheering section and off of my bike. Since I am not to the level of needing bike shoes I just had to lift my bike into the stand and start running. Running immediately after a hard bike ride is bizarre. My muscles were so confused I almost fell. Off for the last three miles of the race armed with a fresh GU and my determination. Just past the mile marker Chad and I pasted each other as he headed toward the finish line and I out to the course. We high fived. 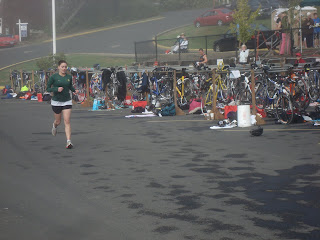 I past a few more people and smiled and those whom I had seen at the various stages. We all seemed to be thinking the same beautiful thought “We are almost done”. Once I past the last mile marker and headed to the finish I was filled with excitement and pride as I realized I was really going to do this. Around the bend and down the gravel hill to the waiting crowd and the finish line. Giving it all I could muster I crossed the finish line of the 18th Annual Lincoln City Triathlon in 1:25:28. 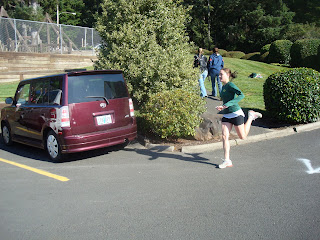 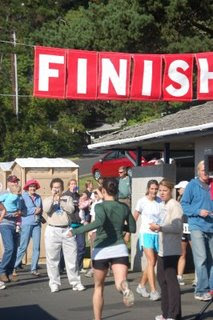 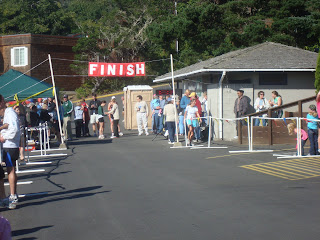 And then I puked behind the bathroom. 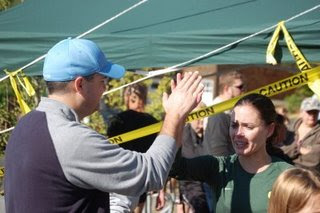 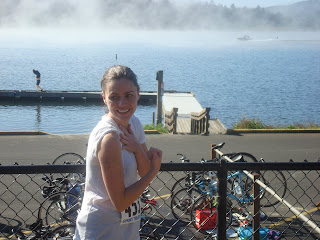 What a crazy accomplishment. The whole event was made even better by having my nervous husband there to support me and cheer me on, my nephew waiting to give me a high five at the finish line, my brother there to share inside jokes about our years of training with our father, and my sister in law there to dream about other races and challenges. 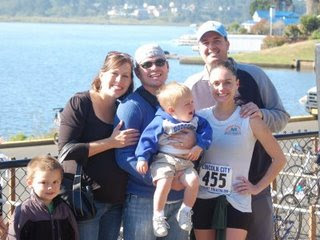 I’m not sure I will do another Triathlon yet but I am sure that I’m glad I did this one! 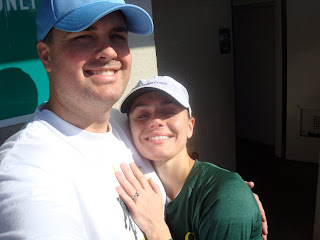