Once, Twice, Three Times a Lady

Once, Twice, Three Times a Lady

I know that that is actually a Kenny Rogers song but since for the longest time as a child I thought Kenny and Dolly were married I still find it an appropriate title to this post dedicated to the lovely lady songbird called Dolly Parton. 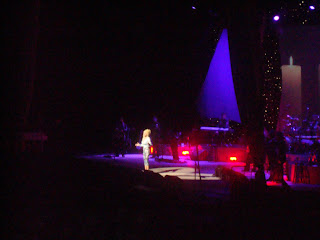 A Sunday ago Daren and I were sitting in one of our favorite weekend breakfast spots eating our eggs in silence as we both read the Oregonian. One of our favorite things to do. Suddenly I broke the silence with the frantic rustling of my section and held up the small ad and exclaimed “Dolly Parton is coming to town!” Daren, being the generous man that he his, smiled and said “Well then get us tickets.” And you better believe I had those tickets so fast.
The day came and I was hyped. I spent a good amount of time trying to put together my flashiest outfit because I felt that Dolly deserved it. Daren was very obliging and went to this concert without any complaints and even said that sure, he was a little excited.
We walked into the venue and there she was resplendent in red sequence. I was immediately drawn in and falling in love. I had never experience that sort of infatuation and the ability to relate to a performer before. I mean she’s little, standing only 5′, she is a lady with boundless class, her roots are in a small town and she’s got some very ‘large assets’. The lady makes sense to me! For the first time in my life it made sense to me how the Beatles and Michael Jackson made women cry. I was engulfed by the charms of Dolly and sat on the edge of my seat singing along the entire time. 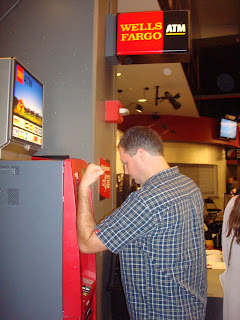 About a quarter of the way in Daren leans over to me and says “Man, Dolly Rocks!” So at intermission we tromped straight out to the Dolly Gear station and proceeded to purchase three Dolly Parton t-shirts. The best part of that is that only one of them is for me. 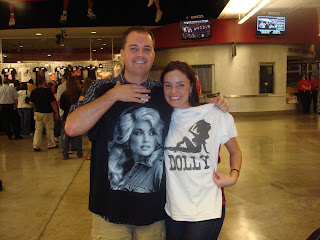 Dolly played nearly every instrument on stage and even rocked the harmonica at one point. She sang an A Capella gospel set with the 8 men in her band that was to beautiful and moving. Plus, everything she touches sparkles. Seriously, everything she touches on stage in covered in rhinestones!
We had so much fun at the Dolly Parton concert it was ridiculous! We decided that if we had gone to see Dolly before we got married out wedding would have been shrouded in Dolly songs. 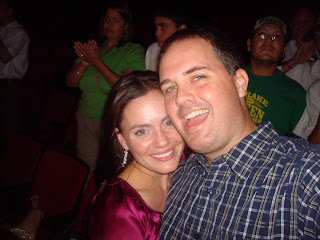 Her new CD is called Backwoods Barbie and is on its way to being a staple in our married music collection.