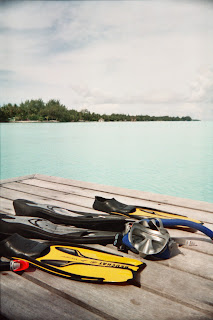 Its true. We have both loved it here but we are feeling ready to go home.
This morning we rented snorkel gear! The hotel has all sorts of coral under the bridges and in the lagoons so we were excited. We swam all the way from our bungalow to the far bridge without seeing a single fish! Then we turned a bend and we started to see them. All of them. Blue ones, yellow ones, green ones, spotted ones…it was so cool. We even had an intimidating stare down with one of the “Long and Skinnys”. Then all of the sudden we saw this big school of these huge dinner plate sized opaque looking fish. They were just the right color so that when they turned to the sized the all but completely disappeared. 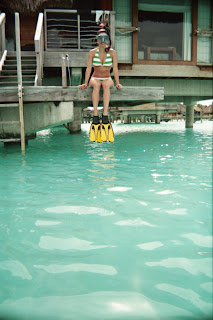 After finding all of these fish we decided we had exerted way too much energy for anyone in Bora Bora and swam back to the bungalow. Once there I finally finished the book I had brought along on the honeymoon with is ironically titled Escape. HA! After two weeks we finally realized that this is funny. Daren read it too making our first two books read together Saving Your Marriage Before it Starts and Escape. 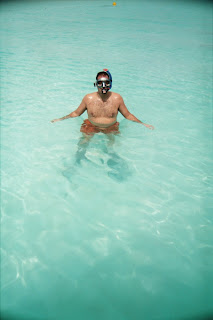 Next up- The Funny Jump Competition.
After several rounds we call it a draw because although Daren’s “Ring of Glory” had a higher difficultly rate that my “Waving Flag” I scored bonus points because my top fell off during my first jump. Daren wasn’t feeling the true patriotism of the “Waving Flag” which entails shooting your arms and legs out to one side and waving your arms like a flag as fast as you can until you hit the water. And Daren’s “Ring of Glory”- which was him doing a cartwheel off of the deck into the water- was really much more like a “Half Ring of Shame” by my standards.
Dinner was at American honeymooners central known to the locals as Bloody Mary’s. It is a sand floored restaurant owned and operated by an American expatriate. So it as the most American thing any of us had seen in a few weeks and it was a surprise to be greeted with an American accent. There is no written menu there. You stand in front a a big table of fish and the owner runs through the way each fish is being prepared that night and you point and pick your dinner. It was so fresh and flavorful! There were also two cats walking around the inside of the restaurant as well as random lizards. But the real excitement came when we missed the one and only bus that left at 9:30 and that would take us back to the dock to catch the one boat that would take us back to our hotel that left at 10:00!
Nothing is freaking on time in these islands expect for this one bus and the shuttle boat! Everyone around us told us it was a different time ranging from 9:15 to 9:45 ( I’m not even exaggerating) and that another bus would be along in 5 to 10 minutes – even if we had just asked that 5 minutes ago. Daren was out in the street trying to flag down random cars and I was frantically trying to get someone to call us a cab. Finally one of the bar patrons asked the bartender who spoke English what was going on and she says “Oh I take you!” I came flying out of the front doors screaming “Daren I got us a ride!” And just then our cab pulled up. We jumped in and and both shouted “Go really fast!” The clock read 9:54. Before he had even come to a complete stop at the Moana ( the location of our shuttle dock) I had the door open my flip flops in my hand and dove out of the door and ran in a flat sprint through the hotel bar and restaurant to the dock. When I got there I threw my hands in the air and shouted “We made it!” Everyone there laughed and cheered. Daren soon followed suit about 30 seconds later after paying the cabbie $20.00 for a 4 minute cab ride.
We high fived each other and the boat was 5 minutes late. 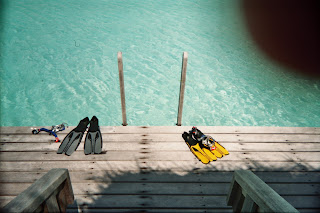