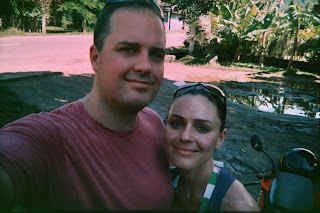 Today I got my own moped.
I was a little nervous. Daren was a little more nervous and the rental guy was down right scared. I had to do several laps around the hotel parking lot until we were all comfortable enough to put me out on the road. There is one main road that runs all the way around Moorea ( which by the way means Yellow Lizard). So as long as you stay on that road you won’t get lost, and stay on it we did. 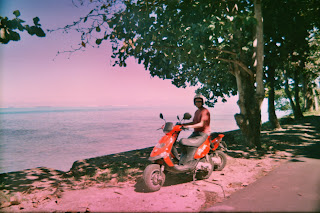 The island is freaking amazing! It is so picturesque and beautiful I can’t find the words to do it justice. I feel like I am on a giant movie set because everything seems way to perfect to be real. This is also the day my digital camera died. So all pictures from here on out were taken on a high tech blue disposable camera. 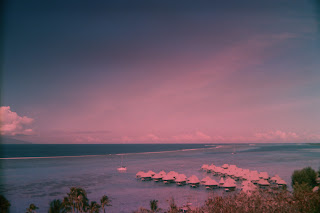 The island takes a good hour to ride around without any stops. It took us a solid two hours stopping at a snack shack to buy a coke, getting ice cream cones at a local shopping center and perusing several black peal stores. 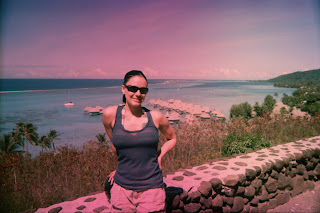 For lunch we returned to Colo d’isle, the place of the pizza eating bet at dinner the night before. We split a pizza this time. My half was pizza margarita and Daren’s half was “Spanish” claiming it came with pepperoni, onions, and capers. What it was really topped with were lots and lots of green peppers! The menu also boasted some sort of vegetable that they translated as “plugs” and for the life of me I have no idea what that is. HA! 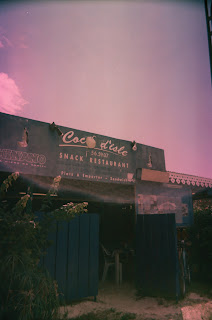 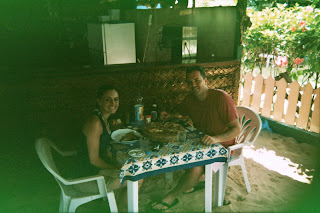 After lunch we hopped back on our red mopeds with black seats. This resulted in a scalded inner thigh for me and some scaled unmentionables for my husband. Once we both stopped yelping like surprised puppies we headed to the gas station and to the black pearl shop. 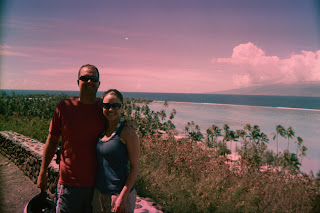 I had been doing really well and was pretty comfortable with my starts and stops on my moped by this time. We even ran into the rental guy at the gas station and assured him that we were both doing great. Then three minutes later we pull into the parking lot of Moorea Black Pearls and I hop off. I hop off without turning the darn thing off and without taking my hands off of the gas! It was a comical and chaotic few moments. Daren especially liked it when while running along side of my speeding moped I hollered back at him “I got it! I got it!” Which was followed by him laughing out loud and saying “Oh you do?!” 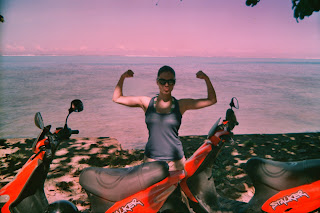 It was such a fun way to experience the island and get to see how the islanders really live. I would also like to point out that Daren Benson has the bravest wife on the island. Of all of the couples out renting and riding mopeds we were the only ones with two. I, Sarah Benson, am brave.