Day 4- WE SWAM WITH SHARKS

Day 4- WE SWAM WITH SHARKS 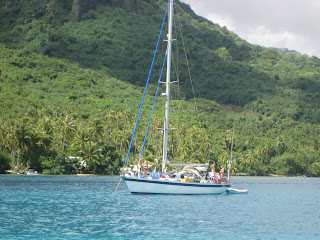 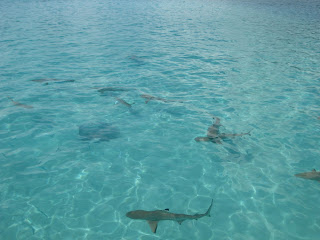 This morning the sun came bursting into our room around 5:30 or 6:00. It was beautiful and I got to see my one and only Tahitian sunrise. I curled in and headed back to sleep because I knew I needed my rest. Today we we’re going on the Lagoon Tours. 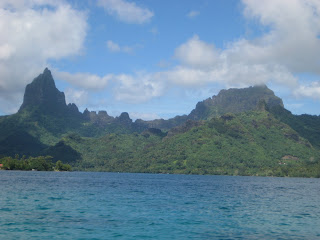 We grabbed a quick breakfast and I poured most of the pot of coffee onto the table, by accident, and we ran to meet out Albert Tours bus. It took us to hotel Bali Hai, yes that Bali Hai from the movie South Pacific. We boarded our boat with 43 other people and a tour guide named Siki who spoke French, English, Spanish and enough Japanese to talk to those couples as well. 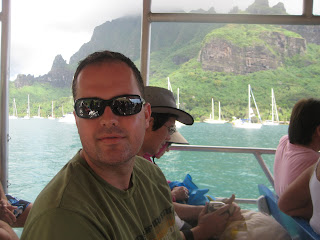 We were the last couple on the boat ( totally my fault) so we ended up sitting in the back row on opposite sides of the aisle. Daren sat next to a very quite Japanese couple who were well covered in hats and sunscreen. I sat next to two classic America couples. The men here huge and arrogant and took up at least twice the space. Their jokes were bad and nonstop with fake accents and they spoke to the locals like they were deaf and stupid. Needless to say I was not a huge fan. Daren actually reached across the aisle and asked the biggest one to scoot over since he was sitting on all of my stuff and taking up so much of the bench I was falling off. HA!

Then the boat stopped ending my internal monologue of irritation. The anchor was dropped and Siki stood up and lowered the stairs into the water. They strung a long rope out and to us to jump in and hang on so that the current wouldn’t sweep us away. 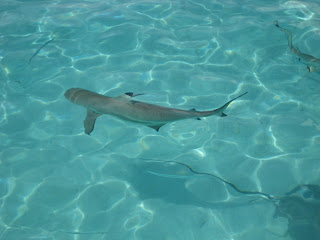 Daren was the first one in ( so brave) and I was the third ( so scared). One look under the water with my snorkel mask and it was official. We were swimming with sharks! Lots of sharks! I was so scared I almost turned back to the boat but Daren coached me along and when I was close enough grabbed my hand and pulled me toward him. I held onto his hand for dear life! As if a rope and Daren’s hand could save me from an irritated shark.
They were black tipped reef sharks and they ranged in size from about 4 ft to 7 ft. Our guides baited then with huge steaks and they swam all around us. There were 45 sharks sharing the water with us today. It was so awesome and scary! That was Daren’s favorite part of the day.
We all climbed back into the boat and headed to our next stop. When the boat stopped and the anchor was dropped we could still see several sharks in the water, but of course we are all such pros we weren’t event scared. Again, Daren was one of the first off of the boat and into the swarm of sting rays! When is was my turn to get off of the boat there were bunches ( 3 or 4) of rays swimming right under the stairs. I asked them to please move along and finally stepped out of the boat and promptly swam the opposite directions of the sting rays.
There was lots of shrieking and laughing and me holding onto Daren for dear life again. The tour guides would hold food in the mouth of the rays and bring them right up on you. Literally on you. The rays flap their wings like they are flying and they will glide up onto you and flap your shoulders. They feel like rubber and are incredibly docile. 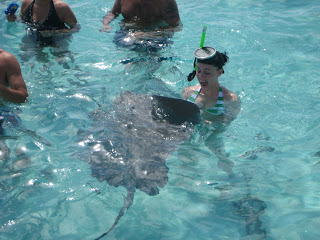 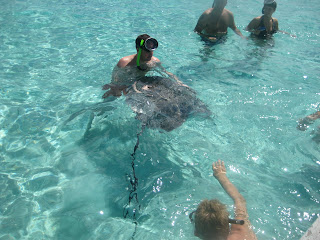 Once everyone calmed down it was incredible. The rays were my favorite part of the day. At one point I headed back to the boat to take some pictures and I was swarmed by rays from all directions. I was laughing and screaming and as I pulled my feet up underneath me I looked down and a shark swam right under my feet! I felt like some kind of tour hero. Man alive it was cool! 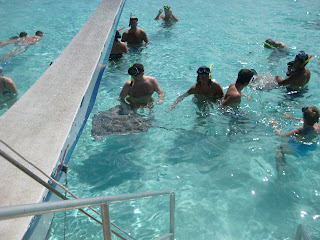 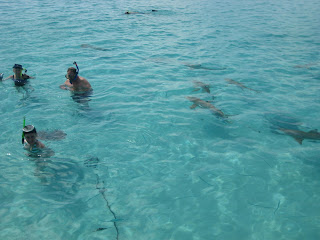 The tour then took us to another small island, a motu, for a fresh Mahi Mahi bbq, Tahitian rum, snorkeling and a coconut husking demonstration. The island is very rural and rustic. It was the first picnic we’ve ever been to where there are chickens, kittens, a dog named Tsunami, and sting rays playing all around. It was a very cool and unique experience. 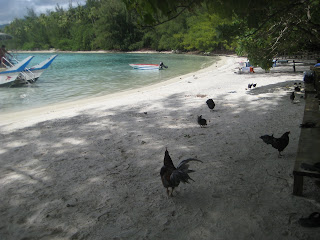